CDV was the organization which brought the so-called Swedish Vision Zero to the Czech Republic. The ambitious Swedish plan from 1997 (first presented already in 1995) to reach “zero number of fatalities and zero number of seriously injured from road accidents” is also discussed in the so-called White paper of the European Commission from 2001: “European Transport Policy 2010: Time to Decide”.

Based on the fact that the Czech Republic accessed the European Union on 1 May 2004, it was necessary to adopt a plan to reduce consequences of road accidents. The mentioned White Paper was a basic document for a range of national strategic documents, including the National Road Safety Strategy 2004-2010, which was produced by CDV. Among others, the document reads: “A well-working transport system must provide quality and financially accessible transport services without its existing negative effects. Therefore, initiatives of a type of “VISION ZERO” begin to appear in foreign countries (Sweden in 1997), which presents a transport system without fatalities and serious injuries. However it may currently seem a utopic vision with even advanced countries being far from this state, reaching it may be real in a certain time horizon. The immediate goal of the presented material is to break the negative trend and start social changes in attitude to road safety.” In 2008 the respective initiative was confirmed in the revision and update of the National Road Safety Strategy for 2008-2010.

CDV played a significant part in the introduction of the penalty point system in the Czech Republic (since 1 July 2006). The organization participated in the system revisions and regularly evaluates the data from the system.

Since 2007 CDV has been developing the Road Safety Observatory, where it regularly shares findings from both the research, and the trends of road accident rates in the Czech Republic and EU. Among others, indirect road safety indicators, road safety audits, surveys, etc. are implemented.

At that time period CDV significantly contributed to adoption and transposition of Directive 2008/96/ES of the European Parliament and the Council on road infrastructure safety management. CDV produced all methodological guidelines for the operation of tools for this directive; they are available on audit-bezpecnosti.cz.

The National Road Safety Strategy 2011-2020 was partially based on VISION ZERO, which is also the leading vision for its revisions for 2017-2020: “The most significant strategic vision which is accepted by the majority of European countries and which was also adopted as the official approach in the USA, is VISION ZERO, which prospectively considers fatalities and serious injuries from road traffic unacceptable. Therefore, every road accident with a fatality or serious injury must be treated as an exceptional event and reacted to it accordingly. VISION ZERO means changing the understanding of responsibility. It does not only concern responsibility of a road user who caused an accident, but also shared responsibility of those who are involved in creating parameters of the transport system – transport system designers, road administrators, car manufacturers, motorist service providers, police, emergency response teams, politicians, lawmakers, administration and judiciary bodies, as well as other entities whose activities have an impact on behaviour in traffic space, e.g. the media, teachers, parents, etc.”

Since 2011 CDV has been developing In-depth Analysis of Road Accidents (HADN), which is a modern tool to properly understand the mechanism of accident origin and its whole course and consequences. Detailed data analyses obtained from road accident investigation are performed independently on the accident data collected by Police of the Czech Republic and their statistical outcomes. HADN activities search for causes of road accidents and their prevention, not for sanctions and persons responsible for accidents. Therefore, HADN offers a new insight into causes of accident origins and may serve as important complementation of police statistics, which evaluate accidents in terms the legal responsibility of their causes. The data from HADN offer a complex view of all factors that are related to a specific accident. In addition, they are used for collection and subsequent analysis of characteristics leading to occurrence of a road accident, affecting its course and consequences. The analysis is focused on research of transport infrastructure, vehicle technology, and mental and health conditions of people involved in road accidents.

VISION ZERO is also confirmed in the latest strategic document, BESIP (Road Safety) Strategy 2021-2030, which follows the mentioned materials: “The basic philosophy of the Strategy is the clear confirmation of VISION ZERO, to which the Czech Republic strives to approach in the following decade. VISION ZERO considers fatalities and serious injuries from road traffic unacceptable. In order to achieve this vision it is necessary to create a safe system participated by road users, vehicles and transport infrastructure. “

The goals set by this Strategy comply with the EU framework policy for road safety for 2021-2030, with Next steps towards ‘Vision Zero’, Valletta declaration as well as with Stockholm declaration. These goals include reduction of fatalities and serious injuries from road accidents by half between 2020 and 2030.

The basic goal of VISION ZERO is neither fatality, nor seriously injured person on roads not latest than by 2050. The original goal from Sweden in 1997 to achieve this goal already by 2020 was later realistically postponed by three decades, i.e. by 2050. The tools how to approach the common goal are defined by the mentioned Strategies for individual decades. 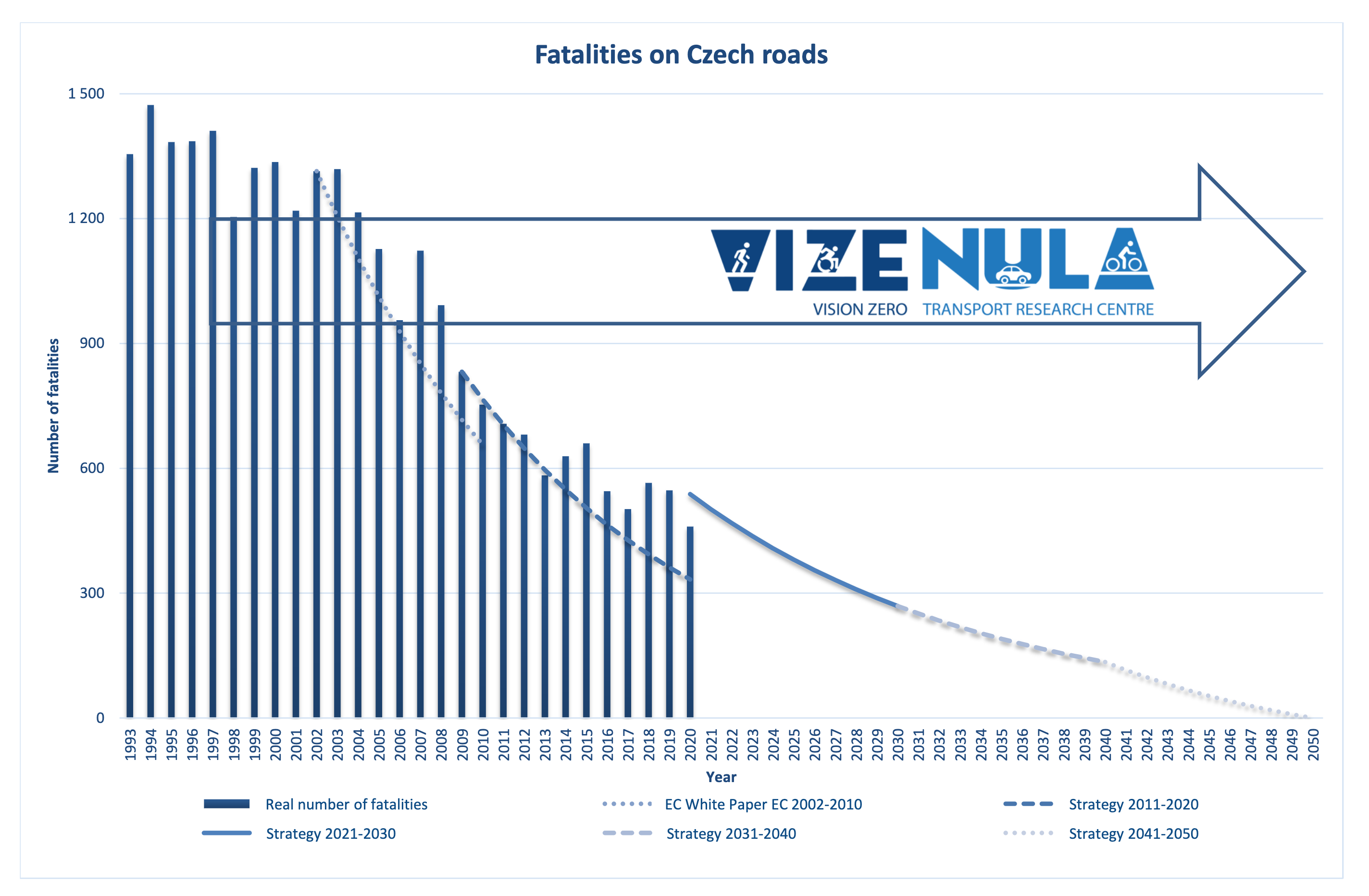