Annual comparison of accidents of young drivers up to 24 years

Despite reduced numbers of traffic accidents with fatal consequences, young drivers remain the most risky group of drivers. They caused 9% of accidents and 15% of deaths. 84 people were killed due to young drivers under the age of 24 (10 less, i.e. -11 % compared to previous year), and another 272 people were seriously injured (125 less, i.e. -32%). The highest share of drivers with penalty points was registered among drivers aged 24.

"It is still true that the most killed and seriously injured are caused by young drivers with less than 1 year practice, especially men. These drivers tend to take risks on the road, but they are not able to estimate the vehicle's limits and how to deal with critical situations. In 2019, young drivers with 1 year of experience killed 24 people and seriously injured 83 people. “The most common causes include excessive speed, driving in the opposite direction, and not paying attention to driving," said the head of the Road Safety department of the Ministry of Transport Tomáš Neřold.

Although young drivers under the age of 24 have a higher share of fatal accidents than other age groups, the positive news is the development in this group and the gradual reduction in the number of serious accidents in which they act as culprits.

Alcohol and drugs: every 8th person is seriously injured "Young road users are risky due to lack of experience, as well as not always behaving responsibly, which is specific for individuals in this developmental period, as reflected in the factors involved in accidents," says Veronika Valentová, Director of the Transport Engineering, Safety and Strategy Division of TRC – Transport Research Centre, and adds: "For drivers under the age of 24 is most common failure in the situation diagnosis, typically erroneous evaluation of a passing road difficulty."

Young drivers generally tend to overestimate their driving skills and at the same time underestimate the potential risks, which is reflected in driving style, but also the related causes and factors contributing to accidents. Expert studies show that the risky behavior of young drivers, in general, is determined by a certain ratio of four factors.

Novice drivers acquire the skills needed to drive a motor vehicle relatively quickly, but it takes significantly longer to obtain enough experience to acquire all the perceptual and cognitive abilities necessary for safe interaction in the traffic environment. As drivers get older and more experienced, there is a decrease in risky behavior and immaturity of drivers.

The most common causes of accidents involving young drivers include non-adaptation of speed to the technical condition of the road (19 killed, i.e. 24% share) and driving on the wrong side - going in the opposite direction (12 killed, i.e. 15% share). The third most common cause of accidents among young drivers was not paying full attention to driving. 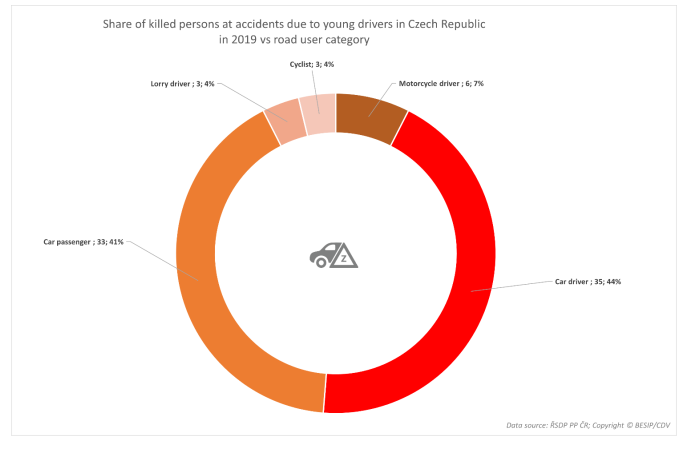 The Council of the Government of the Czech Republic for Road Safety is aware of the problematic nature of this target group and, within the newly prepared National Road Safety Strategy 2021-2030 is preparing space for projects and programs leading to improvement within short-term and medium-term activities.

One of the examples of prevention for young drivers is the START DRIVING project. It focuses on the advanced training of novice drivers with a group B driving license within one year of obtaining it. A part of the advanced training in road traffic and at the training track is also a traffic psychological seminar. As a coordinator of prevention in the Czech Republic, Road Safety Department supported this project within the framework of the Damage Prevention Fund and, as a partner, is involved in the project through its coordinators in the regions.

The Ministry of Transport (MoT) presented a draft amendment to the Road Traffic Act (No. 361/2000 Coll., On-Road Traffic and Amendments to Certain Acts) with effect from 1 January 2022 to increase road safety. After 14 years of operation, the current system is to be simplified to only three rates of scored offenses (2, 4 and 6 penalty points) and 4 zones of fines (up to CZK 1,500, CZK 1,500, CZK 2,500 and CZK 5,000). This is a model adopted from the United Kingdom, according to which novice drivers would have a half-point limit for 2 years instead of the current 12-point limit, i.e. a 6-point limit, after which they could lose their driving license. Drivers will have the opportunity to be informed about the status of their points account via SMS, e-mail, or data box. However, these are not just young drivers - the driving license for the test will concern the so-called novice drivers, which may also be older people who have decided to complete driving school later. According to statistics, drivers with short experience are often the culprits of traffic accidents with serious consequences.

If we take into account the total number of drivers at a certain age and relate the number of scored drivers of a given age to this number, then in this case we can state that the largest group consists of drivers aged 24. The largest share of scored drivers was registered for both men and women with the date of granting a driving license in 2014. 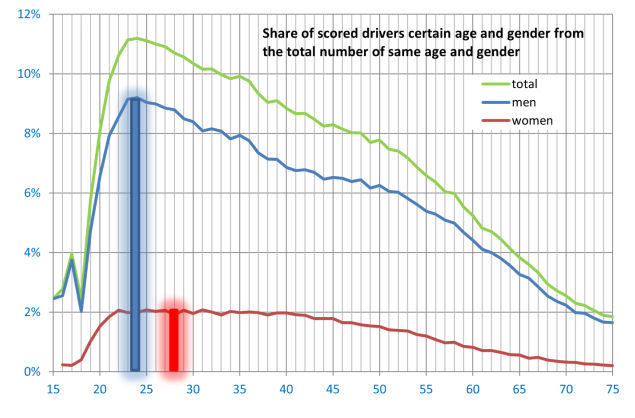 More detailed information on this issue is contained in the sources listed below.